As a part of PRMS’ ongoing commitment to behavioral health, we invited Nada Stotland, MD, MPH, and Jack W. Bonner, MD, to contribute as guest bloggers this month, reflecting on their career paths and sharing helpful advice with colleagues starting out in psychiatry.

A new psychiatrist has numerous options and the potential for flexibility as he or she begins to chart a career path. For example, some psychiatrists choose to work in only one setting, while others opt for a hybrid approach, maintaining a private practice and also working in a hospital or community mental health center. In addition to going solo, other psychiatric career alternatives include academia, industry, government, the military, and more. Some pursue additional training to become specialists or go on to receive advanced degrees such as a MPH, PhD, or MBA.

Despite so many options, early career psychiatrists may not know where their career is headed and can benefit by connecting with and learning from more experienced physicians. That’s why Senior Psychiatrists, Inc., an outgrowth of the American Psychiatric Association (APA) “Lifers,” and PRMS have teamed up to offer a series of interactive sessions, Lesson Learned, with notable senior psychiatrists offering their career advice. Here, we offer a brief look at the career paths of two psychiatrists who provide insights into negotiating a flexible schedule, the importance of mentors, doing your homework, and more.

Nada Stotland, MD, MPH, entered the field to become a psychoanalytic-oriented therapist. Today, she frequently writes about psychological aspects of women’s reproductive health and is a Professor of Psychiatry and Obstetrics/Gynecology at Rush Medical College in Chicago, IL.

After graduating from the University of Chicago School of Medicine, Dr. Stotland became Director of Psychiatric Consultation-Liaison Service and Psychiatric Education at the school. She later served as Medical Coordinator for the Illinois Department of Mental Health before being named Chair of Psychiatry at the Illinois Masonic Medical Center in Chicago.

A former president of the APA and a past president of Senior Psychiatrists, Dr. Stotland is also a graduate of the Chicago Institute for Psychoanalysis and has a Master of Public Health from the University of Illinois at Chicago. Dr. Stotland says she loves the fact that psychiatrists have a myriad of choices and can often pursue interests simultaneously, unlike those in many other medical specialties, who are often in the same office, seeing one patient after another, working with the same system for however many hours each day.

“You can work in a community mental health center a couple of days a week and have a [private] practice other days,” not to mention be an administrator or a teacher, said Dr. Stotland. She has maintained a side practice through much of her career and offered the following tips:

Don’t sign your life away. Considering a job with a big healthcare system or private practice? Try to negotiate a flexible schedule, such as doing inpatient or outpatient work three days a week, and something “that fascinates you,” such as research, the other two days. Because there’s a shortage of psychiatrists, “you should be able to have some control over what you’re willing to do,” Dr. Stotland noted. “Don’t give that up lightly.”

Interested in academia? Try to make the move early in your career. Dr. Stotland said she thinks it’s much easier to go from academia to other settings than the reverse because of expectations that a hire has to have teaching experience, been published, received research grants, and the like.

Cultivate mentors. Go to APA and other professional meetings, particularly if you’re a member of an underrepresented minority. A few years ago, Dr. Stotland headed up a lunch table talk about publishing. A resident said she’d like to publish. Dr. Stotland, who loves writing but does not enjoy looking up references, was asked to write a chapter in a major textbook a few months later, and knew just who to turn to. The pair have been working together ever since.

Do your homework. Before you agree to accept a job offer, talk to someone who has recently taken a job there, particularly if there’s high turnover and people “don’t stick,” Dr. Stotland advises. At one department where a young female psychiatrist had been harassed, Dr. Stotland said she watched “one woman after another” get a job and leave.

Enjoy the long haul. “You can practice psychiatry until you’re 80 years old if you’ve kept your wits,” said Dr. Stotland. Some seniors become locum tenens and travel a few months of the year to interesting places while still working with patients and earning income. “There aren’t too many heart surgeons who can do that,” she noted.

Jack W. Bonner, MD, a retired psychiatrist from Greenville, SC, finished training at Duke University Medical Center during the Vietnam War, but with the draft looming entered the U.S. Air Force and served at The School of Aerospace Medicine at Brooks Air Force Base in San Antonio, TX. While there, Dr. Bonner performed medical evaluations of flight personnel, including candidates for the astronaut program, and taught physicians training to become Flight Surgeons. His love of aviation led him to pursue a private pilot’s license prior to discharge.

After the military, Dr. Bonner headed to Highland Hospital, a not-for-profit, private psychiatric  hospital in Asheville, NC, owned by Duke University. He began as a staff psychiatrist and later served as Director of Outpatient Programs and Medical Director before being named CEO.

Dr. Bonner, also a past president of Senior Psychiatrists, spent the second half of his career at what is now the University of South Carolina School of Medicine in Greenville, SC, where he  served as Department Chair and is now Emeritus Professor of Neuropsychiatry and Behavioral Science. In addition, he has held numerous academic positions at other universities.

“I had trouble going in a single direction, so I wound up doing a little bit of [everything],” Dr. Bonner explained of his career, which has included military, administrative, and academic roles, all while maintaining a patient caseload. “A lot of it was serendipitous – having opportunities that sort of presented themselves along the way,” he explained. Volunteer participation in organized medicine also proved rewarding. He has been a member of governance in his state and local medical/psychiatric societies, as well as at the national level. This has allowed for numerous networking opportunities, which Dr. Bonner believes can be important to one’s career.

Dr. Bonner’s advice? “Don’t put all your eggs in one basket.” Your career can be either sequentially varied – you can start in one setting and easily move into another, such as moving from private practice to the public sector – or you can keep your hands in several things at the same time, like he did, such as having a private practice but also a salaried position with a health center.

Tonya Davies, Head of PRMS, said educational partnerships such as this are key to the company’s mission. “We are excited to continue promoting awareness of Senior Psychiatrists and know that early career psychiatrists who sign up for one of these free programs or who are paired with a senior mentor will truly benefit from the Seniors’ vast experience and career knowledge as they navigate unique challenges throughout their careers.”

In the spirit of mentoring in the virtual world, PRMS is teaming up with a few members of Senior Psychiatrists to host a webinar, Psych-cess, on Tuesday, September 29, 6:30-8:00PM EST, for residents, fellows, and early career psychiatrists. The event will feature a panel of psychiatrists sharing their expertise and discussing their career paths, as well as a Q&A session of audience-submitted questions. Register for free here. 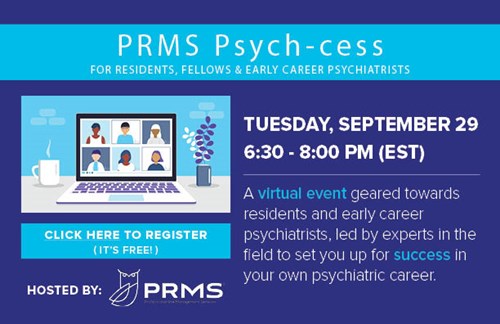