In its 50th anniversary year, the Mississippi Psychiatric Association (MPA) plans to do something about this. In May, the Association is announcing the launch of an ambitious campaign designed to encourage faith-based communities to be welcoming and supportive of people and family members affected by mental illness from October 7th to October 14th 2018.

The initiative will focus on fostering dialogue and reducing stigma that addresses the medical and spiritual dimensions of people seeking care. The goal is to have every major faith-based organization in the state present a program, sermon or bulletin write-up addressing the connection between faith and mental health.

“We want to help banish stigma – when bad things happen on the news, that gives a lot of people a really negative impression of mental illness, but a lot of times it’s really not what is going on and that’s a terrible thing because patients are further ostracized,” said Maxie Gordon, MD, a psychiatrist and MPA president. “We think by reaching out to churches we will be able to have a big impact in the lives of people who suffer from mental illness.”

MPA, incorporated in 1967, is a District Branch of the American Psychiatric Association (APA). MPA hopes to partner with Southern Baptist, Catholic, Protestant, and Jewish congregations, as well as Hindu and Muslim organizations. Although outreach is just beginning, Gordon, former Director of Medical Student Education at the University of Mississippi School of Medicine, who now works at East Mississippi State Hospital and G.V. (Sonny) Montgomery Veterans Affairs Medical Center, said the idea has met little resistance.

The goal is to provide a better understanding of science and evidence-based treatments for mental illness and to highlight how for many, support and reinforcement from faith-based leaders in recovery can be key to successful outcomes.

“We are in the South and it is very much a faith-based bunch of people who feel like it’s extremely important to have their medical team and their faith team on the same plane,” said Angela Ladner, Executive Director of MPA. “We don’t determine who the higher power is – we just want the dialogue to occur.”

As part of its outreach, MPA plans to provide faith-based leaders “Mental Health: A Guide for Faith Leaders,” a guide developed by the APA. If successful, MPA hopes to build a tradition that is recognized annually during Mental Health Awareness Week.

MPA has a long history of successful lobbying, thanks in large part to Ladner, who began working with the Association in 1999 as its contract lobbyist.

Since 2005, MPA has partnered with the Mississippi State Medical Association on a Capitol Screening Initiative (CSI). Ladner launched the initiative because she wanted elected officials to better understand what physicians do each day. The program brings free health screenings to members of the legislature and staff once a year in January. MPA also has psychiatrists onsite to advocate for the profession and talk to legislators about issues affecting the practice.

“We find that often our elected officials don’t take the time to monitor their health, especially during the legislative session,” said Ladner. Since CSI began, cases of male and female breast cancer and an imminent heart attack have been detected, she added.

Ladner spends three months a year at the legislature when it is in session. When she began working for MPA, the Association fought for the ability to hold people who were a danger to themselves or others with a so-called “72-hour hold statute,” which passed in 2000.

MPA is now focused on promoting mental health courts. Last year, it helped pass statutes that allowed for pilot programs in certain areas of the state. Legislation this year would allow such courts to be set up statewide and also provide funding. Gordon said the group also hopes to get legislation adopted surrounding mental health parity to make sure that companies are identifying and paying for issues and treatment related to mental health.

Retired psychiatrist June Powell, MD, MPA President from 1997 to 1999, who later was a member of the Tulane University School of Medicine faculty before returning to the state more than two decades later, was key in getting recognition for Mississippi at the national meetings of the APA.

In addition to working to change laws, Powell said one of the most important things about MPA’s impact in a rural state such as Mississippi “is meeting colleagues and knowing then who to refer patients to while building your practice. It really helps to see what other people are doing particularly because many people are very isolated. It gives a feeling of community and that was extremely valuable for me coming back because I was away 25 years.”

Psychiatrist Vincent Liberto, MD, of the G.V. (Sonny) Montgomery Veterans Affairs Medical Center, served as President of MPA for two terms and noted that in addition to its lobbying impact, the Association also helped secure better staffing and more continuity at community mental health centers and worked to address regions of the state that had low ratios of psychiatrists to the population.

In nearly 20 years with the Association, Ladner said she has seen it become more diverse. Gordon is MPA’s first African-American President. But it has grown in other ways, in part a reflection on the profession.

“There are many more female physicians. The Association also is more culturally diverse and its membership has broadened, helping bring in different perspectives and ideas,” Ladner said.

“Our longstanding relationship with PRMS truly allows us to accomplish our mission every day,” Ladner said. She sends MPA members a weekly electronic newsletter with information from PRMS about risk management and other issues that reinforce “everything our people need to be thinking about.” PRMS also presents MPA members a half-day of CME seminars at no cost during the annual meeting.

“MPA is a strong and effective advocate for psychiatrists and their patients,” said Stephen Sills, PRMS President and Chief Executive Officer. “It is our privilege to have worked together through the decades and we look forward to many more decades to come.”

For more on MPA, visit http://www.msmpa.com. 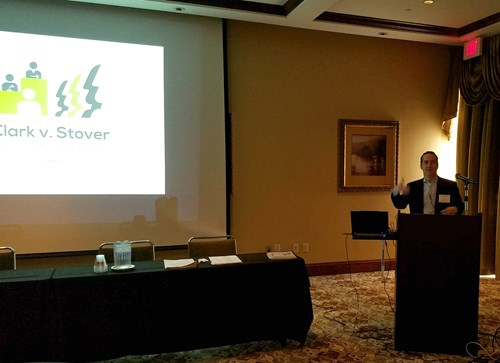 Charles D Cash presented a CME seminar during the Annual Meeting in March. 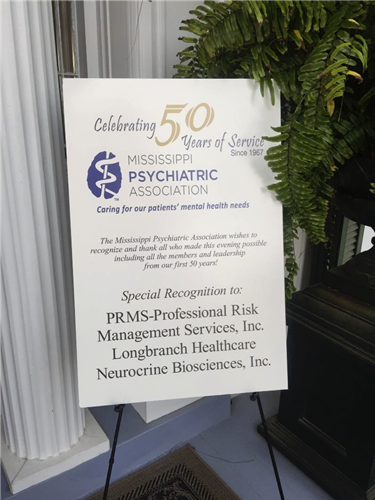