Psychiatrists and psychiatric residents took a break from their busy schedules recently for a 5K run and walk designed to help them get better acquainted with colleagues while promoting mental health awareness in the community.

The Brooklyn Psychiatric Society’s second annual Fun Run, Walk & Meet, sponsored in part by PRMS, manager of a medical malpractice professional liability insurance program for psychiatrists, was held on Sept. 26, 2015. The event included an optional 5K run and was the perfect way for members of the Brooklyn Psychiatric Society and their families and friends to “meet and greet” in a relaxed setting – all while getting a little exercise! 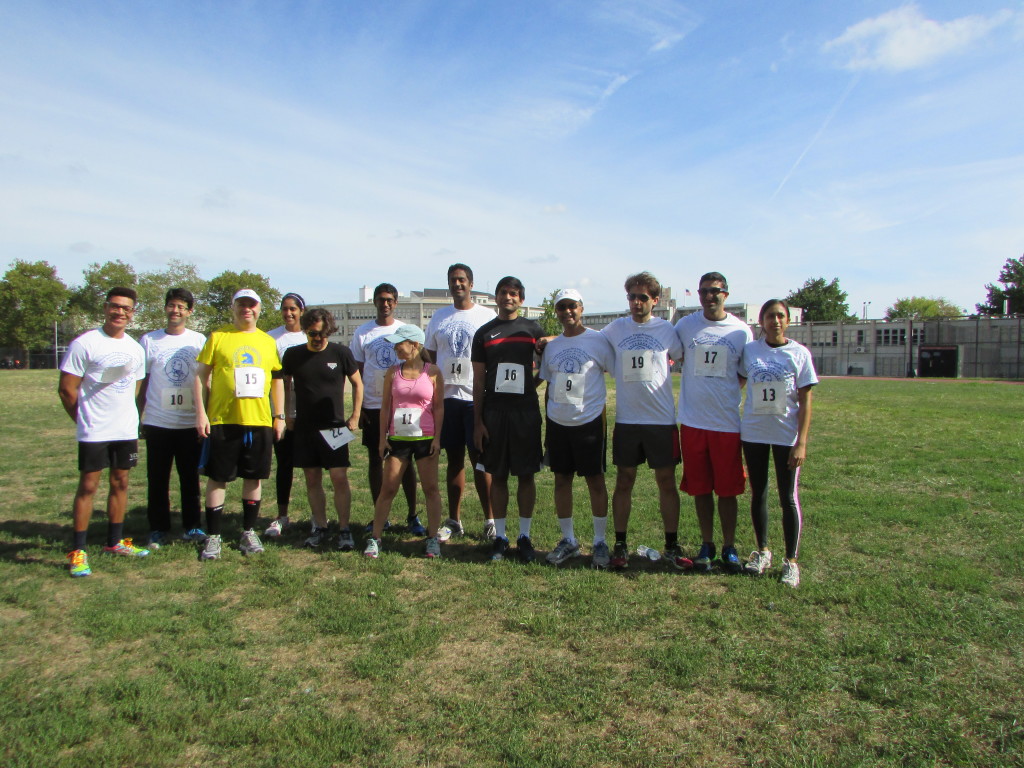 The venue was the track at the George Wingate Educational Campus near Kings County Hospital Center and drew attendees from the three psychiatric residency programs: SUNY Downstate Medical Center, Maimonides Medical Center and Brookdale University Hospital.  The event was open to members of the district branch and their guests who wanted to run, walk shorter distances for fun or simply watch and cheer. The top three 5K finishers received prizes, and all attendees received commemorative water bottles and T-shirts.

“It was quite successful and we very much appreciate the PRMS support,” said Dr. Viswanathan. “We were pleased with the turnout – there were about 35 people and 19 were runners and walkers.”

Next year, Dr. Viswanathan hopes to expand the Fun Run to include other residency programs outside of Brooklyn, including those in Manhattan and Queens. The society has also been holding a successful annual scientific presentation contest for residents for 23 years which was also pioneered by Dr. Viswanathan when he was president.

Community outreach was a key part of the Fun Run, Walk & Meet, according to Linda M. Majowka, Executive Director of the 300-member Brooklyn Psychiatric Society. The school is in a park-like setting frequented by the community, so the Society made sure it had plenty of literature on mental health issues like “Depression” and “How to Find a Psychiatrist” available for community members who stopped by and wanted to speak with attendees.

“Everybody was smiling,” Majowka said. “It’s a fun way of doing something for both the membership and our community.”

Majowka praised PRMS and particularly the support provided by Justin E. Pruett, JD, a litigation specialist for PRMS who helps clients in the resolution of lawsuits, administrative actions and claims. Pruett traveled from Arlington, VA to Brooklyn to represent PRMS at the event. Although he’s not a runner and only planned to socialize, Pruett said Dr. Viswanathan quickly convinced him to give the 5K a try, and he finished. Back in the office and feeling a bit sore, Pruett reflected on the event. He said the high point was stepping out of the office – away from the telephone and email – to meet in person many of the psychiatrists that PRMS insures.

Working in claims, Pruett said he often hears from psychiatrists at very “difficult times in their career,” such as when a patient has committed suicide or the physician is facing some other emergency relating to his or her practice.  “It was nice to see psychiatrists face-to-face in a light-hearted environment where they could see who I am and I could see who they are,” Pruett said. “It really helps bolster and create a personal relationship and friendship that goes beyond just the business relationship that we have.”

PRMS is committed to supporting state, regional and national psychiatric organizations and was pleased to support this event for a second year.