*This piece is a re-print from the Mississippi Psychiatric Association E-newsletter. 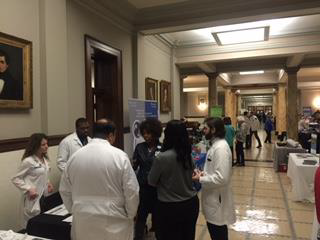 Twelve years ago the Mississippi Psychiatric Association (MPA) Executive Director Angela Ladner recognized there was a gap in understanding by elected officials on what physicians actually do each and every day. In order to help overcome the deficit, Ladner partnered with a familiar group to her, the Mississippi State Medical Association Alliance (physician spouses) with the proposal for a Day at the Capitol that would include free health screenings to members of the Legislature and their staff members. Capitol Screening Initiative or CSI was born and is going strong twelve years later with the help of providers across the state. CSI takes place on the 3rd Thursday of each January which has been designated as MS Health Day by former Governor Haley Barbour.

This year Residents and staff from the University of Mississippi Medical Center Department of Psychiatry manned a table and discussed services and outreach with members of the Legislature. Shown above and below are scenes from the day. MPA has been an exhibitor at each and every CSI since its inception; sharing brochures from the Healthy Lives Series produced by the American Psychiatric Association (APA). Additionally, MPA President-Elect, Maxie Gordon came to the capitol to represent the association and discuss future endeavors. Since CSI began, cases of male breast cancer, female breast cancer and an imminent heart attack have been detected. Please click here to read more about CSI. 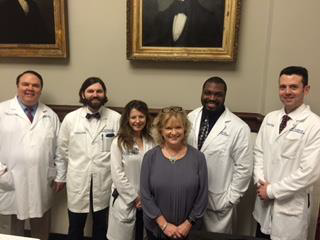 Angela Ladner is the Executive Director of the Mississippi Psychiatric Association.