“Bronxters” Back At It: Raising Money in NAMIWalksNYC 2016 and “GLIPS” Starting a Tradition with NAMIWalks Long Island/Queens 2016

Overcast skies and chilly temperature didn’t dampen the spirits of dedicated mental health providers who took part in a recent National Alliance on Mental Illness (NAMI) Walk in New York City and Long Island. They came together to help raise funds to support mental health and to work to stamp out the stigma people affected by mental illness face.

PRMS supported teams from the Bronx and Greater Long Island Psychiatric Society (GLIPS) District Branches of the American Psychiatric Association (APA) known as “The Bronxters” and “GLIPS.” The two teams raised more than $6,700 combined for NAMI, which provides free support, education and advocacy programs for individuals with mental illness and their families.

The NAMI Long Island/Queens walk celebrated its 12th anniversary this year. Over 850 participants joined in the walk on May 7 and raised over $200,000. Dr. Vadim Izgur, a psychiatrist at South Oaks Hospital and Dr. Julie Cyriac, a psychiatrist at New York City Children’s Center co-captained the GLIPS team. Members from the GLIPS District Branch of the APA and staff from South Oaks Hospital were also members of the team. 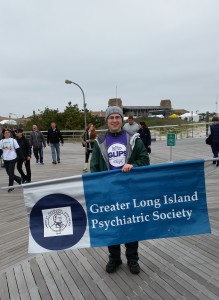 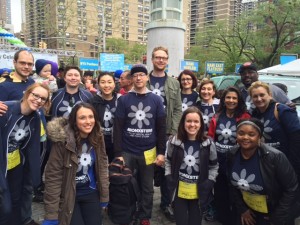 The Bronxters of the Bronx District Branch of the APA

Now in its 10th year, the 5K walk drew more than 5,000 New Yorkers and raised more than a half million dollars for NAMI-NYC Metro. According to NAMI, more than $530,000 brought in will fund a half-year of NAMI-NYC services for New Yorkers who need its services most.

The NYC walk started at the South Street Seaport Promenade, then went over the Brooklyn Bridge and back to the Seaport, where event-goers took part in New York City’s second #IWILLLISTEN Day. A concert and wellness fair with free massage, basic health screenings, and prizes were all featured.

Every year, tens of thousands of concerned citizens in more than 84 communities across the nation join NAMI on these walks. The idea behind NAMI’s #IWILLLISTEN campaign is this: 1 in 4 Americans are impacted by mental illness. By taking the #IWILLLISTEN pledge, you can add your voice to others by making a promise to listen and do something if someone you know needs help.

“We applaud ‘The Bronxters’ and ‘GLIPS’ passion and willingness to stand up to be counted in support of mental health advocacy,” said Stephen Sills, PRMS Executive Chairman and Chief Executive Officer. “We are delighted to support both the Bronx and GLIPS District Branches of the APA, as well as NAMI-NYC and NAMI-LIQ in their efforts to promote awareness and hopefully banish the stigma associated with mental illness.”

Lindsay Lease, a PRMS Marketing/Communications Specialist in New York, NY, represented PRMS at the NYC event for the first time.