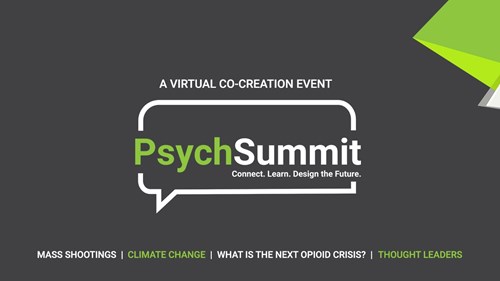 The inaugural PsychSummit event, held January 15-16, 2020, brought together participants from across the United States—as well as Canada and Brazil!—to discuss some of the most pressing issues in psychiatry, as well as the future of the profession. The live virtual event consisted of four sessions covering the topics of Mass Shootings, Climate Change, the Next Opioid Crisis, and a special discussion led by Thought Leaders on the future of psychiatry.

While the session video played, a live chat simultaneously allowed members and speakers to make personal connections and have robust discussions – there were more than 900 chats exchanged during the event, and participants were able to share their own experiences and ideas in a meaningful and practical way. As a recap to PsychSummit, all registrants will receive an eBook that captures the collective knowledge and resources shared during the event from both speakers and attendees alike. Although the live event has ended, the sessions are available to watch on-demand. Register to access the recording of the conference here.

The January 2020 Summit, open to all psychiatrists, followed the first PsychSummit event, which was held in September 2019 and geared towards residents, fellows, and early career psychiatrists. The 2019 event, titled “PsychSummit: How to Change the World & Get Paid,” can be accessed for free here.

Join the next PsychSummit event on May 27th, 2020 and participate in a national conversation on mental health and climate change. Register free of charge here. To be informed of future PsychSummit events, email hello@psychsummit.org.

PsychSummit is a project of the Colorado Psychiatric Society, the New York County Psychiatric Society and MatchBox Virtual Media. We were thrilled to have the support of numerous Contributor organizations, including the American Academy of Psychiatry and the Law and District Branches from Maine to California for the January 2020 event. 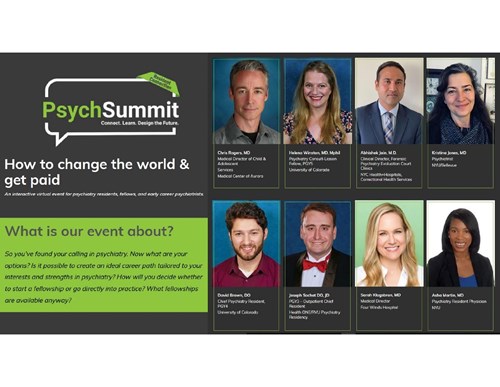 PRMS is pleased to have participated in both prior PsychSummit events. To learn more about the superior psychiatry-specific insurance program and comprehensive services offered by PRMS, click here.