Women’s Equality Day celebrates the passing of the Nineteenth Amendment, which prevents states and the federal government from denying an American’s right to vote due to sex. In honor of the 100-year anniversary on August 26th, PRMS is pleased to highlight our partner organization, The Association of Women Psychiatrists, and the work it does for both women psychiatrists and the behavioral healthcare community.

Women psychiatrists face both professional and personal challenges – often facing obstacles in a field once dominated by men. For nearly 30 years, The Association of Women Psychiatrists (AWP), a partner of PRMS, has served as a community and a voice for women in the field of psychiatry, helping women achieve personal and professional fulfillment by promoting inclusive leadership, fostering professional development, and developing a network for its members.

“When I think of AWP, I think of a sisterhood from a very heartfelt place within me,” said AWP President Warachal E. Faison, MD, CMD, a geriatric psychiatrist and senior medical director, Pain and Neuroscience at Pfizer in New York City. “Our mission is to mobilize women psychiatrists to work together to provide quality mental health care for all persons. We realize that there is so much involved in the day-to-day world of being a psychiatrist, as well as having a work-life balance and a life outside of psychiatry, and we pride ourselves on promoting leadership, professional development, and networking.”

Founded in 1983, AWP champions the needs of women psychiatrists while giving members the opportunity to share with colleagues their motivations, passions, accomplishments, and challenges. The Dallas-based independent membership organization was founded by the late Alexandra “Allie” Symonds, MD APA fellow, along with a small group of enthusiastic women psychiatrist colleagues. Prior to AWP’s founding, there were no independent women’s association in the field of psychiatry.

“Nearly three decades after it was founded by a group of forward-thinking practitioners, AWP remains a vibrant and active organization with a diverse membership of women from around the globe, working at every professional level from residents to senior-level psychiatrists,” said PRMS Business Leader Tonya Davies. “In light of the critical shortage of psychiatric providers, we are a proud partner and applaud AWP’s efforts to help set women up for success so they can enjoy long, fruitful careers in the field of psychiatry.”

Dr. Faison, who joined AWP in 2004, began her two-year term as President in 2019. In addition to continuing to focus on the association’s mission, she hopes to increase engagement among AWP members and awareness about the association in the community-at-large. She also works toward growing AWP’s membership and outreach via social media and awareness of resources that may improve access to mental health services for physicians and physicians-in-training, and particularly those for women.

AWP and PRMS have partnered since 2017, allowing PRMS representatives to attend AWP member meetings and receptions, and share educational risk management resources with AWP members, among other benefits. AWP’s Executive Director, Frances Bell said she is “extremely appreciative” of PRMS’ ongoing support and dedication to the association. Dr. Faison added that the partnership with PRMS is significant because “in the psychiatric world, risk management is extremely important for everybody to be aware of and practice.” 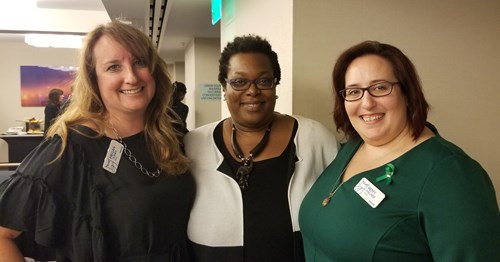