As a psychiatrist at Montefiore Medical Center in the Bronx, Dr. Sonal Harneja, MD, often worked with people having their first psychotic episode. Much of her work involved reducing the stigma surrounding mental illness and educating patients and their families about the causes, symptoms, prognosis and potential treatments.

“It can be incredibly scary for them and their families as they navigate a new onset mental illness,” Harneja said recently. In part because of that, for the past five years Harneja has rallied colleagues to support the National Alliance on Mental Illness (NAMI) and raise money on its NAMIWalks NYC events.

Thus far, over $636,000 has been raised in 2019 by NAMIWalks participants to provide year-round services – including 30 different peer-led support groups and educational programming – to 13,000 New York City families and individuals living with mental illness. Since the first walk in 2007, NAMIWalks NYC has raised nearly $5 million.

On May 11, Harneja and a team of colleagues – “Montefiore Psychiatrists” – from the Bronx District Branch, joined more than 4,000 others for the 13th annual 5K NAMIWalks NYC 2019. “NAMI has done so much for our patients and their families with its advocacy and raising money,” said Harneja, who has served as a team captain the past four years. “It’s just a cause that I knew I had to be a part of.”

This year’s NAMIWalks NYC event was co-hosted by two Broadway actors; Alex Boniello, star of “Dear Evan Hansen,” the Tony-winning show about how mental illness affects teens and their families, and Patti Murin, who portrays Anna in “Frozen: The Musical” and has spoken publicly about her struggles with depression and anxiety and encouraged other to seek help.

Over the years, PRMS has paid for and designed team t-shirts, made donations and, sent representatives to join the walk. “We raised a little more than $2,000 this year and I’m so appreciative of the support PRMS gives us. They’ve been so wonderful helping us out over the years,” Harneja said. 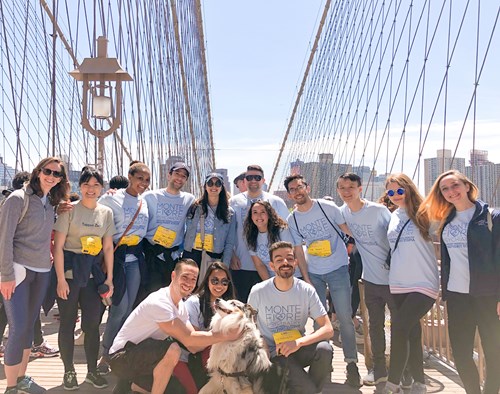 “Everyone is rising to the occasion and I really enjoy being part of this very, very much,” Harneja said. To learn more about NAMIWalks, visit https://www.namiwalks.org.

Montefiore Psychiatry NAMIWalks team posing prior to the walk.